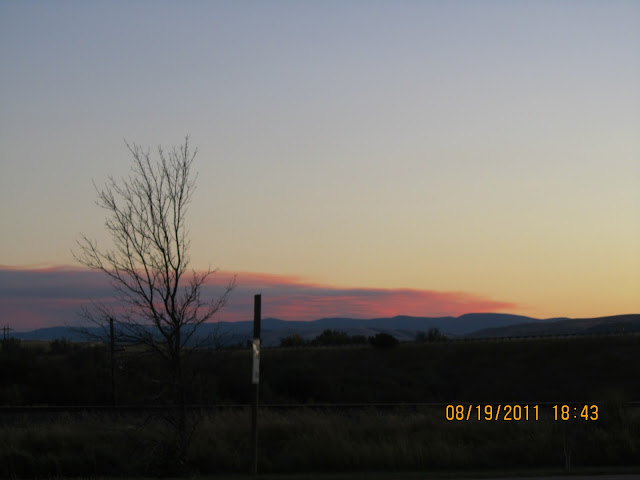 We spent the night in Drummond, Montana the night before the ride. Drummond is a tiny down in Montana, it is only 30 miles from Phillipsburg (Pburg) and Pburg is where the ride began, August 20th, 2011, high altitude and all. I was hoping I would be ready, I’d been training religiously, doing more than 220 miles a week and trying hard to add as many hills as possible, because training at sea level is not the same as high altitude riding.

We arrived in Pburg at 6:00 AM, the ride was to begin at 6:30, we arrived in time to have the first bicycle meal and chat with the other participants who were doing the full 120 miles. 120 miles, yep, it seemed daunting even while training, mostly because some of the ride was climbing into high altitude territory and as every athlete knows high altitude training and competing is different than all others.  I very used to riding centuries but 120 miles with a big climb into the Pintlers where I often ski was making me tense, but I was there to finish the ride, so I keep my internal voice positive, like I could do this ride no problem. I keep my fingers crossed too though. So with that we were off.

It was 6:30 AM and 35 degrees outside when the ride began, I wasn’t completely prepared for the cold, but it was time to go, so we took off. I have a speaker for my IPod that I carry so I can zone to tunes while riding these rides and the ride began with Rescue Me, Fontella Bass, it got my blood flowing, listening to Aretha while riding can do that to a person.  I was ready  and willing to put every effort into this ride, and so we were off pedaling back to Drummond as that was our first stop.  It was a cheerful happy group of cyclists, my husband and I representing the Pacific Northwest and everyone else from Missoula and Hamilton. They were fun and welcoming we felt right at home.

We felt like we were flying to Drummond, we rode 30 miles in one hour and 15 minutes.  That is flying! My husband was actually impressed that I was able to keep up the pressure and keep up the speed. I’d slow down later I told him with much confidence… hahahahaha, he knew it too, but so far so good. 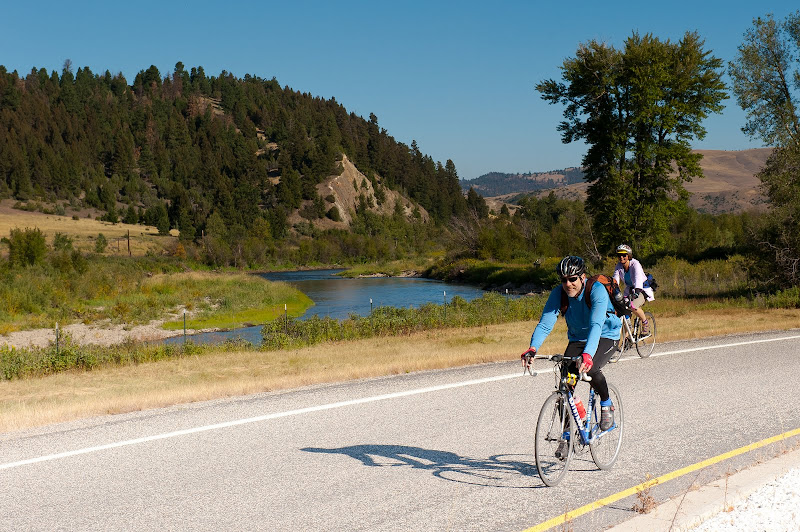 This is us leaving Drummond, we saw the photographer often, Jonathan Qualben, and his photos of the ride are beautiful. The sunset picture is mine, but the next several photos were taken by him.

We flew out of Drummond and rode the next 28 miles to Deer Lodge in record time too, it took us another 1.5 hours to get there, I was feeling like an Amazon queen we were riding so fast, but of course much of the uphill was yet to begin,  it would begin outside of Anaconda and we would climb to Georgetown Lake before descending 1100 feet in 3 or 4 miles. We got to Deerlodge before the parade was to begin, although I have no idea what the parade was about, and neither did the organizers of the ride! The look on the cops faces as they were directing traffic when they saw this large group of cyclists was quizzical or maybe even stunned, you could see they were thinking, what or who the hell are these people. I wonder if they ever found out?

The ride so far was fantastic, we ate at the historic prison which was pretty cool too. Getting to Deerlodge was interesting, we rode mostly on frontage roads, with just 6 miles on I-90, but what freaked me out the most was the cattle guards across some of the roads! I thought those things were going to take me out and it freaked me out.  I actually carried my bike across the first one I was so deeply paranoid that it would wipe me out. My husband waited patiently for me, he is such a good guy, no wonder I like him so much.

It was also fairly nostalgic for me, when I first returned to the states from overseas I’d settled in Montana where most of my relatives were from, this ride was like going backwards in time, to the peaceful place I’d remembered from my youth. There is something about Montana that isn’t the same as every other state I’ve ever lived. Oh I digress, I miss Montana so entirely sometimes because I miss the peace and quiet, I miss the sound of the wind every so slightly moving the wildgrass and wildflowers in the plains I miss that you rarely hear the roar of traffic there, I miss the slower pace, I miss that place, where you have time to drink in the scenery and hear your own thoughts and your own heartbeat. It’s the goal of every Montanan I’ve ever known, to go home eventually, and I am pretty sure I know why.

We left Deerlodge and began to fly again, I’d already had one flat tire, but things seemed to be going okay and my tire seemed to be holding out just fine. 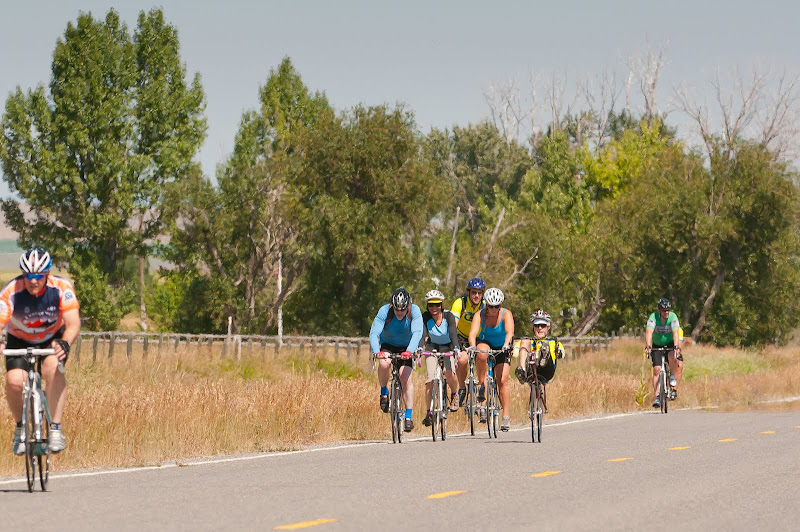 You can see us, chatting and having quite a fantastic time, by this time it was around 90 degrees which is quite the swing from our 35 degree start. The roads we so quiet and the locals were so fantastic, no one buzzed us, not one person yelled or tried to run us off the road, it really was the dream bike ride. 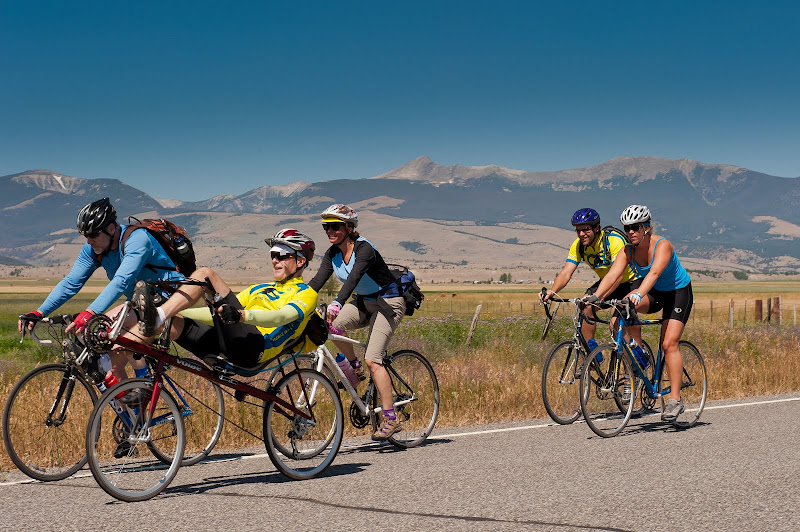 God my legs are white, living in the PNW for 25 years has really left me ghostlike!

Here we are getting closer and closer to Anaconda. 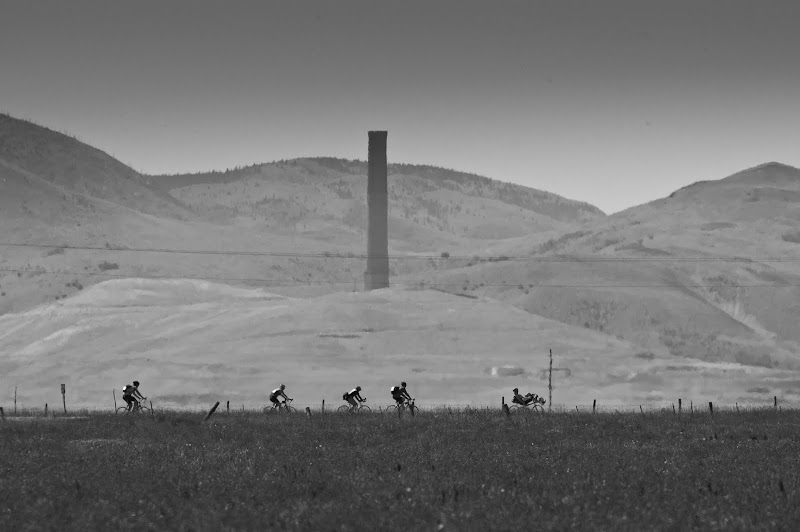 I am the third person in that line and my husband the second, this truly is my favorite picture of all with the smelter rising in the background, I bought a large one to frame for the house. This is my Montana.

We stopped in Anaconda before heading up the hill to Georgetown Lake. I actually took a short nap at this stop much to my husbands consternation although he was really sweet about it, he only prodded me slightly. He was afraid I was done, we were 89 miles into the ride at this point. I wasn’t done of course, but I did need the Advil to kick in before starting back up, by that time it was around 95 degrees. I was hot.  I finally arose from my short nap and you could see the look of relief on my husbands face, as I picked up my bicycle I noticed my front tire was flat again, but as luck would have it there was a mechanic right there and he changed my flat for me and dug out the metal from a radial tire that had embedded in my tire, I told my husband right then this accounts for my being so tired! Hahahahaha, and so we began the climb to Georgetown. And boy was it a climb. It wasn’t bad until we got to Spring Hill which is just before Silver Lake which is less than one mile from Geogetown Lake. I knew that if I could just make it up this hill I would be home free. It took time but I made the climb and we were still averaging 15 mph. 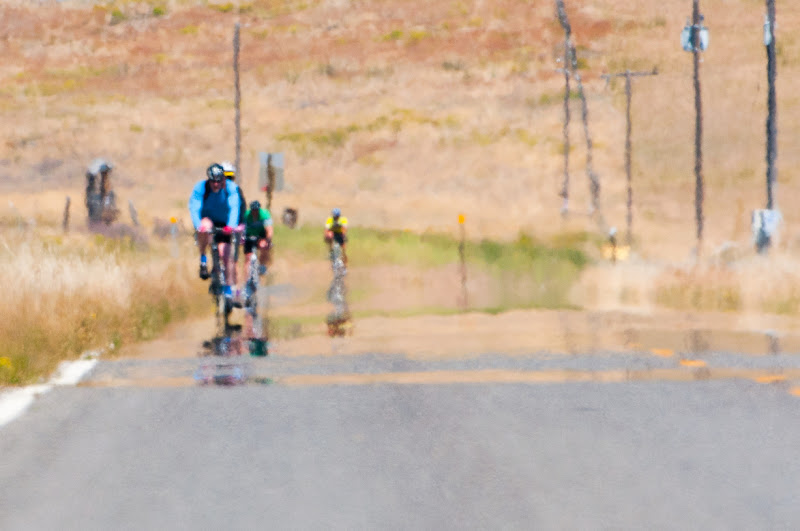 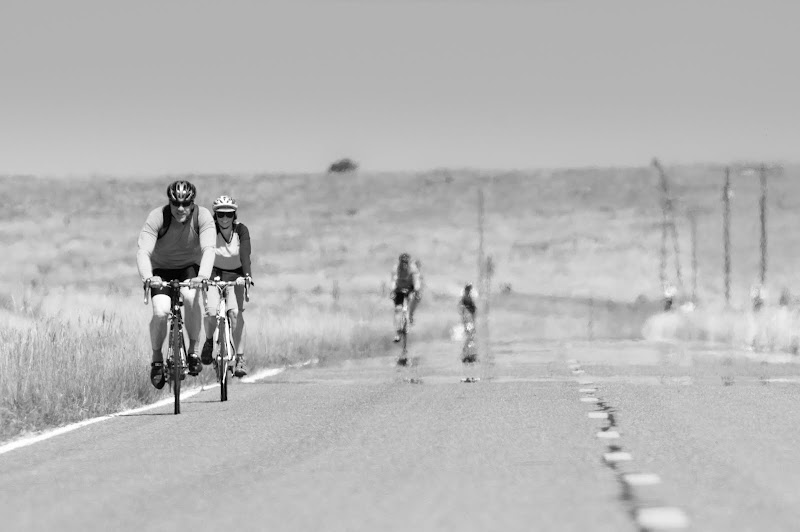 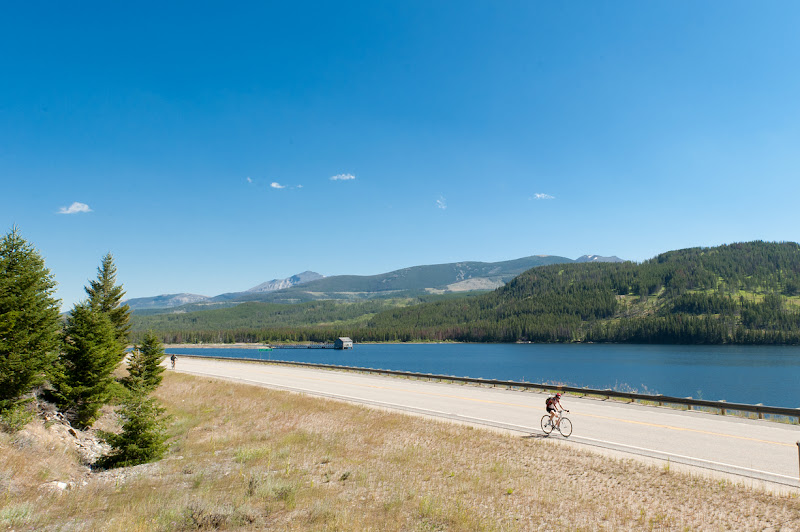 This is Silver Lake not Georgetown, but it isn’t far from Georgetown. Isn’t it beautiful.

As expected there was another rest stop with snacks and ample water, which I needed once we refreshed we headed towards the downhill, which was the most fun ride downhill I’ve done in a while. You drop 1100 feet and once down there is only 6 more miles to get back to Pburg.

These next pictures are photos I took. 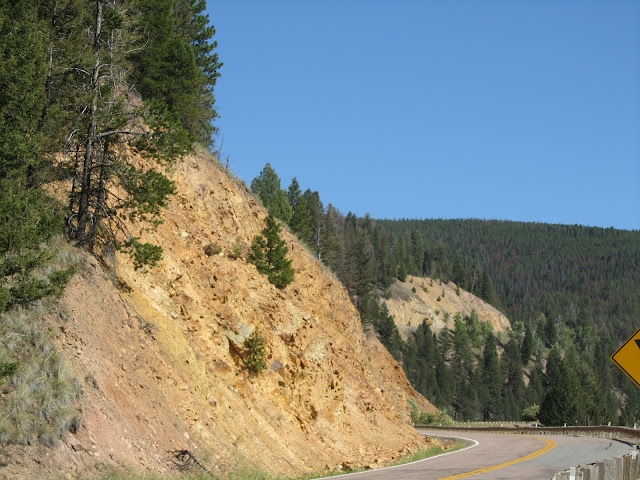 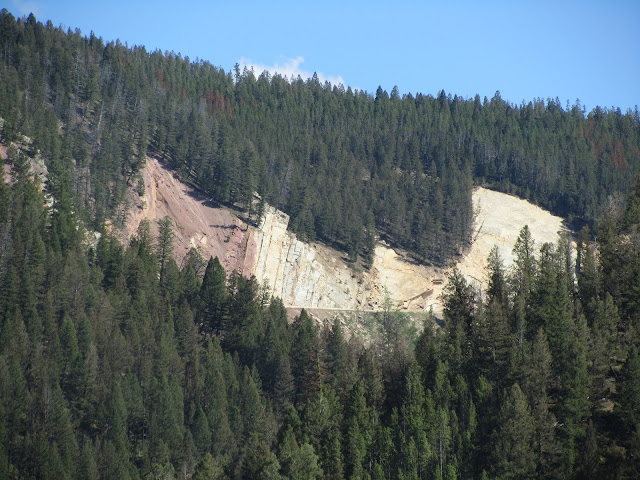 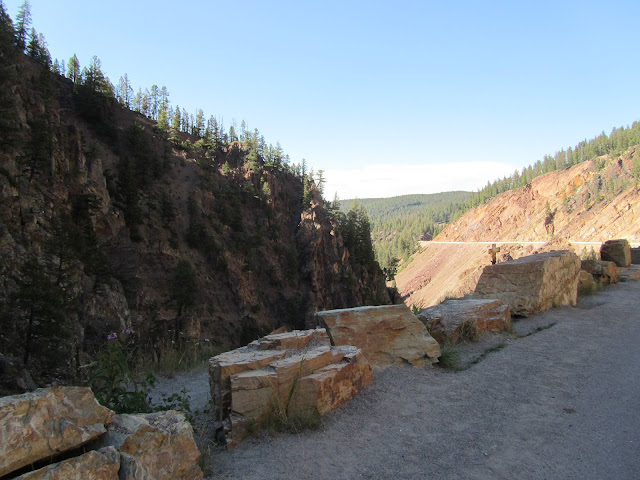 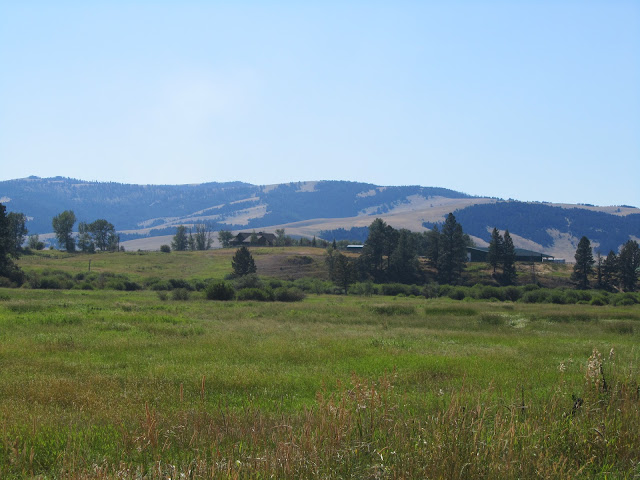 This is a photo after the descent, talk about beautiful and I think just be seeing the photo you can feel the peacefulness of this area. 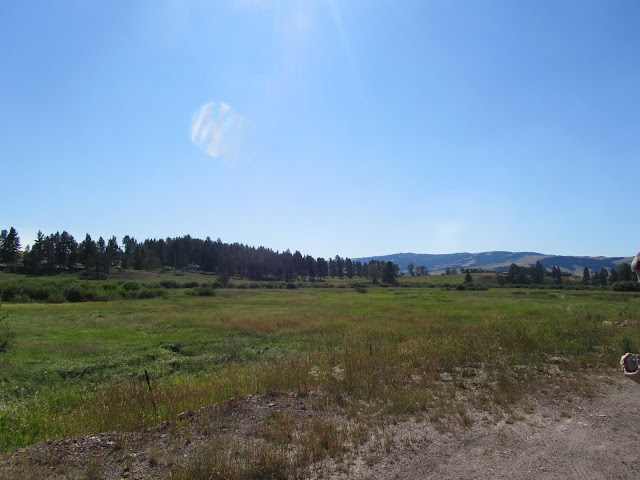 Anyway, I really think that if anyone is looking for a the perfect bike ride next year, come ride the Cycle 4 Symphony you will not be disappointed.

Map of the route. 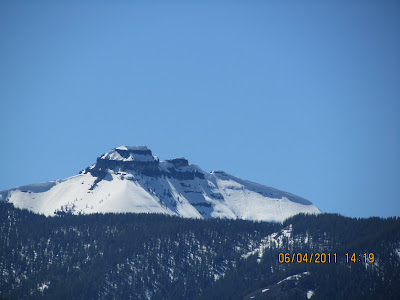 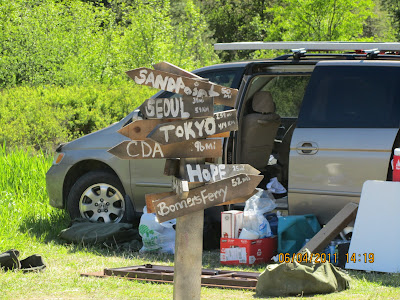 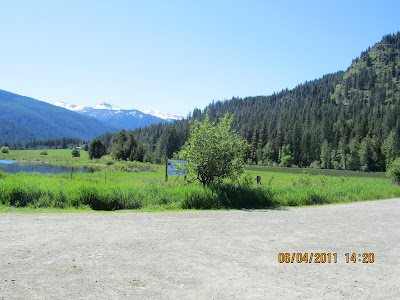 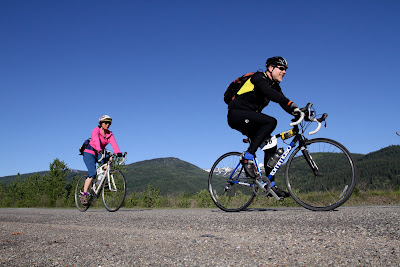