Good morning, children.  Today we’re going to talk about one of our favorite topics: The zombie-ridden post-apocalypse. 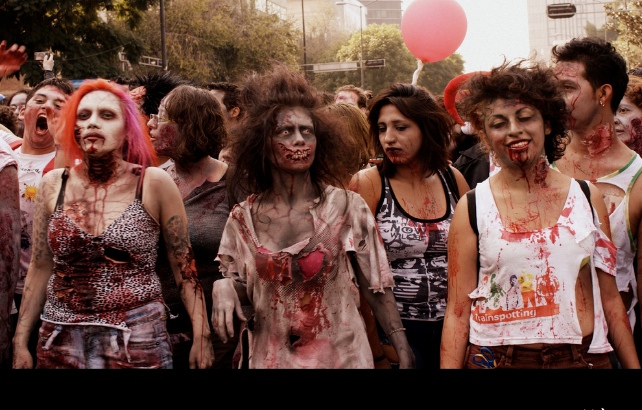 We’re not talking the classic Haitian voudou zombi here, as described by Harvard researcher Wade Davis in “The Serpent and The Rainbow” as an individual placed in a pharmacologically induced catatonic state.

We’re talking about the shuffling undead brain-eaters characterized in pop culture, beginning with George Romero’s “Dawn of the Dead” and leading all the way to the recent mashup novel “Pride and Prejudice and Zombies”.

We’re looking at the post-apocalypse of Russell Hoban’s “Riddley Walker” (a favorite for many years, and the novel I’d most like to make into a feature film) and Walter Miller’s “A Canticle for Leibowitz” (another great work of speculative post-apocalyptic dystopia) as our setting.

It’s because I read stuff.  And this morning, I was reading an article from the excellent Canadian aggregator The Mark: How to Thrive in Our Zombie World.

In places around the world, normal life and the institutions that support it have already collapsed. And we’re not just talking about Africa or the Middle East. We’re also talking about the developed North. Within the evacuation zone of the Fukushima Daiichi plant in Japan, recovery is probably a generation away. In Detroit, a 25 per cent population decline over the past decade calls for the city to shrink. There are some bold ideas circulating about returning parts of the city to wilderness or farmland. This is post-apocalypse in the heartland of the American industrial age.

We’re seeing drastic dislocation, massive disruption, failures of industries, institutions, and infrastructures, and a general sense that the ground has shifted and things are no longer as we thought they were.

It’s all true.  And I’ll let you muse on that in your own time.

Kuznicki does, as part of his article, make a couple very good points about post-apocalyptic zombie-world life, excerpted here:

Those from the fundamentalist tradition of apocalyptic Christian belief warn us to “repent, for the end is nigh,” but they are missing the point. The world as we know it has already ended. We’re past the point of no return, and look around: I don’t see any evidence of the Rapture anywhere.

Once we realize that the world has ended but that life continues, we will adapt, and we will rebuild. Belief that the end is nigh, or that the world can be restored so that it once again exists as it did before, are ideas that disable action because they make our desired goals seem impossible, and our actions futile. Humans have always found ways to adapt to changing environments, but we cannot do this if our mental models are out of touch with the realities of our environment.

So, in order for life and civilization to thrive again, do we first need to understand that we’re already beyond the apocalypse? Maybe the revolution we need is first and foremost a revolution of thought – a new way of making sense of our world, and of accepting the true nature of 21st-century life.

Clearly, what we’re most in need of is first, the realization that things are not as they (never really) were, and next, that we do have the chance, if we’re propelled by the right sort of vision, to remake things in better ways.  Our opponents are not the Republicans, not the teabaggers, not the fundamentalists, at least not entirely.  Our real opposition is the idea of restoration, of return, of having reached limits – the defeatist mentality that tries to tell us that the only thing left is to extract what remaining wealth there is and squander it on our few remaining moments, in order to go out with a bang and leave behind monuments to our former power far more massive than those of ancient Rome.

I met a traveller from an antique land

Who said: “Two vast and trunkless legs of stone

Stand in the desert. Near them on the sand,

Half sunk, a shattered visage lies, whose frown

And wrinkled lip and sneer of cold command

Tell that its sculptor well those passions read

Which yet survive, stamped on these lifeless things,

The hand that mocked them and the heart that fed.

And on the pedestal these words appear:

`My name is Ozymandias, King of Kings:

Look on my works, ye mighty, and despair!’

Nothing beside remains. Round the decay

Of that colossal wreck, boundless and bare,

The lone and level sands stretch far away”.

We’re better than that, or at least we can be.  I don’t have the answers, or even some of the questions, all I know is that what we’ve done so far shows promise but is not, in the parlance of that wretched TV show, a “final answer” to anything.